Advocates of ZigBee see the potential. ZigBee is a global standard for wireless monitoring, sensing and control applications. ZigBee has been gaining widespread acclaim for its potential impact in residential, industrial and commercial applications and is now being considered for metering solutions.

While numerous wireless standards exist for highspeed data applications, none of these solutions addresses the unique needs of remote monitoring and control for sensory network applications like ZigBee. The ZigBee standard is built on IEEE’s 802.15.4 global standard. The ZigBee stack, which sits on top of IEEE 802.15.4, adds an application services layer, security layer and the mesh network layer to create the ZigBee standard. The combination delivers low complexity, inherent reliability, long battery life and the ability for networks to form autonomously and maintain themselves without operator intervention.

By creating a standards-based wireless networking solution, ZigBee ensures that product solutions are vendor independent. While ZigBee supports a variety of network topologies, including star, mesh and cluster networks, its mesh network design is a fundamental and differentiating attribute. Mesh networking topology increases the number of pathways information can travel, enhancing the overall network reliability. Information is not lost or dropped if one network node fails; information is simply rerouted to the next closest node on the network. Mesh networks of up to 65,000 radios can be readily supported.

Energy management and automatic meter reading (AMR) are important applications of this wireless network technology. Consider the immediate impact to a utility company if wireless sensors were installed in industrial and residential meters. Across the network, sensors could be programmed to take readings of electricity consumption at varied intervals or as frequently as needed and report back to the utility company to better manage usage needs and to effect change in real time to billing systems. Utility companies could remotely test systems and determine where upgrades would be beneficial or faulty equipment was in need of repair.

Additionally, the utility can gain the ability to shed load by managing ZigBee controllable devices through the meter connection. As an example, light levels could be lowered 5% in commercial spaces, saving substantial energy while not causing any significant impact to the building environment.For consumers, advanced metering technology designed to interface with new ZigBee-based residential controls could offer a number of advantages. For example, thermostats could be raised or lowered in multiple zones manually from a single control panel, or automatically based on readings from wireless sensors placed around the house. Weather forecasting isn’t an exact science, and if temperatures soared well above normal in summer or dropped well below expected ranges in winter, homeowners could automatically adjust the internal climate in their homes by dialling in to their network from their cell (mobile) phones before returning home. With greater metering and usage detail, consumers – or the utility with the consumer’s permission – could more effectively adjust utility consumption and save on energy costs.

Where did ZigBee originate? The ZigBee Alliance was founded in the fall of 2002 by industry leaders Honeywell, Invensys, Mitsubishi Electric, Motorola and Philips, plus over 20 other leading organisations. These companies banded together to define and develop a global interoperable standard for the development of easily deployable, low-cost, low-power, wireless communication products. 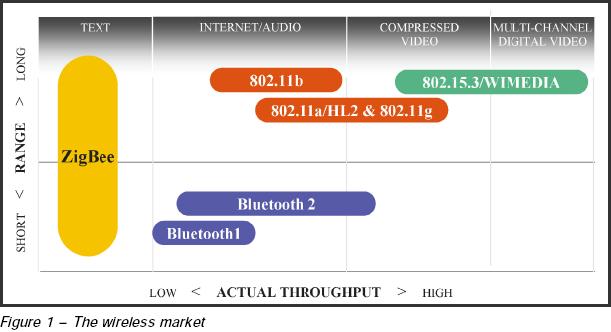 This has helped individuals and organisations gain a greater understanding of the value of ZigBee to their wireless networking efforts. The opportunity to access and view the ZigBee specification directly from the Web transcends geographic hurdles in educating people on the benefits of ZigBee-based wireless networks. Now, less than three years after it was formed, the ZigBee Alliance is a global consortium of over 180 member companies spanning six continents and 29 countries.

The collaborative nature of the ZigBee Alliance has helped to foster its success. Since ZigBee’s inaugural Open House event in San Jose, California in late 2003, attendees have been able to see live demonstrations of technology built on ZigBee by Alliance member companies. These events have provided a key opportunity for individuals and companies to view implementations of ZigBee first hand and gain invaluable insight into the ZigBee architecture. In addition to live demonstrations of technology and making the specification publicly available, the Alliance has also created a special membership class, the Adopter class, specifically designed for organisations that are interested in developing products.

This October the ZigBee Alliance will hold its inaugural Developers’ Conference in Las Vegas, Nevada, USA. Attendees will be able to work hands-on with member company representatives to see how ZigBee could benefit their own organisations’ wireless communications initiatives.

Applications for monitoring and controlling electric, gas and water utilities based on ZigBee are being explored. ZigBee member SK Telecom in Korea is currently working on a wall stud and moisture detector application whereby sensors could be placed in hard-to-reach areas and report on problems for years or even decades on a single battery. The BM Group in Milan, Italy has demonstrated its light switch and source technology that allows lighting to respond to a variety of controls including motion, daylight and security system controls. Freescale Semiconductor and Invensys in the USA are teaming up to develop smoke and carbon monoxide detectors that would instantly report problems to a central monitoring station in a home or offsite security company while simultaneously sounding an alarm.